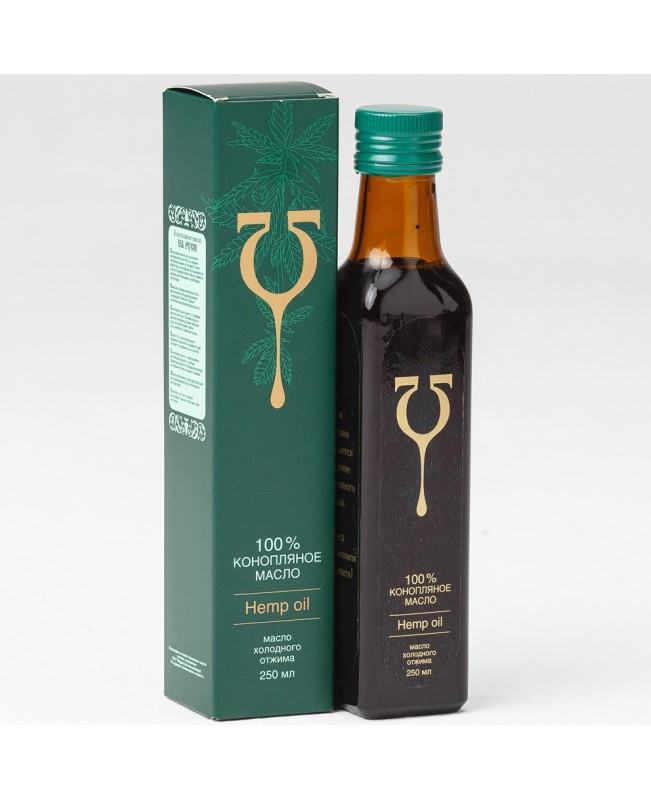 Cannabis oil is obtained from its seeds by cold pressing or by alcohol extraction. The composition of the oil and the variety of culinary uses meets modern dietary trends. Hemp oil is green in color and has a slight nutty flavor. The dense dark green color of hemp oil gives the pigment chlorophyll c..

Cannabis oil is obtained from its seeds by cold pressing or by alcohol extraction. The composition of the oil and the variety of culinary uses meets modern dietary trends. Hemp oil is green in color and has a slight nutty flavor. The dense dark green color of hemp oil gives the pigment chlorophyll contained in the seed coat. Hemp oil is much more useful than the most common and traditional oils, such as olive, sunflower, palm. Among premium salad oils (linseed, camelina, mustard, pumpkin, amaranth), it is preferable due to the ideal balance of polyunsaturated fatty acids. Hemp oil has been familiar to humans for more than four millennia, and before the start of World War II it was the most commonly used vegetable oil. In Europe, before the advent of sunflower in 1773, people mainly used hemp and flax oil for food purposes. With daily use of hemp oil, protection against conditions associated with metabolic disorders, as well as diseases of the cardiovascular system, is enhanced due to the unusually high concentration of a unique spectrum of fatty acids. Their record levels are found in an extremely limited number of edible oils. Enough 15 - 20 grams of hemp oil per day to cover the daily needs of the human body in fatty acids. Indispensable polyunsaturated amino acids are present in high concentrations in hemp oil, these are gamma-linoleic acid (Omega-6) and alpha-linoleic acid (Omega-3). Omega-6 deficiency can lead to severe metabolic disorders, such as neurodermatitis, rheumatoid arthritis, and diabetic neuropathy. Omega-3 is similar in its properties to fish oil and is used as a dietary supplement for cardiovascular diseases and the treatment of chronic inflammations. In the matter of maintaining the balance of fatty acids supplied with food, their ratio is extremely important. The ideal balance for Omega-6 and Omega-3 is a 3: 1 ratio. But under normal nutrition, a person takes 20 times more Omega-6. Hemp oil satisfies the ideal balance of Omega-6 and Omega-3, which contains the desired ratio of the desired 3: 1, which allows regular consumption of fatty acids to be maintained with the ideal ratio. The protein content in hemp seed is up to 31.5%; when cannabis kernel is extracted from the shell, the concentration can reach up to 35%, which is a kind of record among other foods, including meat of animals and fish. The amino acid composition of hemp protein is characterized by the presence of eight essential amino acids. One of the main components of hemp protein is the globular protein edestin, which is found in nature only in hemp seed. In its structure, it is similar to human blood plasma globulin. Due to this affinity, the human body is able to easily synthesize immunoglobulins from hemp proteins involved in the formation of the immune response. Due to its high content of polyunsaturated fatty acids, unrefined hemp oil deteriorates quite quickly if storage conditions are not met, but the natural antioxidants such as tocopherol and vitamin E present in it significantly slow down rancidity. To avoid self-oxidation of the oil in contact with oxygen, exposure to high temperature and light, it must be stored in a dark and cool place, such as a refrigerator. Hemp oil during frying loses its unique properties due to the destruction of valuable substances, therefore it is preferable to use oil during cold cooking, for example, dressing salads, marinades and cold sauces. Hemp is one of the few organic agricultural crops in Europe that can be grown by refusing to use chemicals. Hemp is characterized by a fast growth rate, the ability to suppress weed growth, its yield rarely suffers from pests or diseases. Unfortunately, only a small part of hemp crops is cultivated in a completely organic way for the eco-product segment.

Spectators are our passion. Creation is our core.